East Asia, the Mediterranean, Africa, and the Andean areas

In East Asia, ancestor veneration was very important. In China, Confucianism strongly emphasized the practice of giving reverence to one’s ancestors. The classical Chinese believe that their ancestors’ souls lived on after they died. Families in classical East Asia were seen more as a unit of those living and dead as opposed to seeing a family on their own. Ceremonial procedures to honor dead relatives were held in homes, temples, and graveyards. Shrines devoted to past relatives were kept in homes. The Chinese would seek advice from their ancestors as well as praise them. Ancestor veneration in China showed family loyalty. 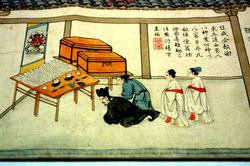 The Chinese worshipping their ancestors

Japan took similar venerations from the Chinese to give reverence their ancestors. Although Confucianism was never a wide spread religion in Japan, the memorial idea of the religion was very important to the Japanese and was adapted to the Shinto religion. Japanese ceremonies of the dead were made up of extravagant funerals and many memorials. Shrines and alters were dedicated to the spirits of a particular family’s ancestors. As in the Hispanic culture, the Japanese had an annual ceremony where the dead would visit their homes. The ancestors were believed to give guidance to their relatives. 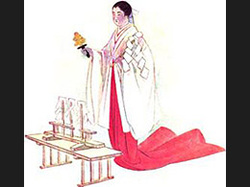 Japanese woman giving reverence to an alter to honor the ancestors

In most of classical India, ancestor veneration was practiced; however, it was not practiced on a wide scale. Hinduism included the veneration of ancestors. However, ancestor veneration was a small part of the religion. In India when a relative passed away, the Indians would lead the spirits during the time between death and rebirth. They did this so that the spirit could reincarnate. This practice went hand in hand with the caste system. In some Indian homes, annual ceremonies took place honoring the deceased male ancestors, naturally according to the caste. These male ancestors were said to give spiritual help in matters like the growth of crops to everyday life.  They would give offerings consisting of food to feed the souls of their ancestors. 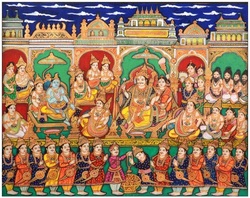 Giving offerings to the ancestors

In Greece, ancestor veneration did take place, although it was not as important as in China or Japan. It intertwined with hero worship, which included the worship of demi-gods or historical figures that were raised to a high status after they died. This was not practiced widely. Ceremonies took place to honor the souls of the supreme heads of the house and political leaders. The souls of the male ancestors whose deeds the family thought were heroic were also venerated. They were made objects of ceremonies. 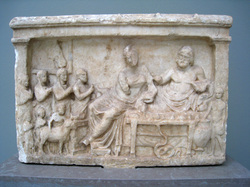 Offerings to the ancestors

In the classical Roman era, ancestor worship existed as a part of religion.  The Romans believed that life existed after death, and that the spirit should be tended to just as a physical body should be tended to. They believed that ancestors should be worshipped as gods, as opposed to just respecting them. The bodies of high members of the church were often put on display for the church to see when they had died. This practice showed how important the Church was to Rome. The Romans believed that their ancestors would return to earth to visit their relatives when ceremonies honoring them took place.  They mostly worshipped ancestors from their homes, where they would create tablets with engraving of the most important ancestors. Of course, statues were made to immortalize and honor the political figures that passed on from the family.

Roman with the ancestors

Ancestor veneration was very important to the Egyptians. Ancestors were seen as friends and protectors of the relatives. The relatives of the ancestors would honor them by giving the dead a proper burial and protecting their grave. Since the Egyptians believed in the afterlife, belongings were placed in the tombs along with the mummified body. They would mummify the body so that the soul of the ancestor could inhabit it after death. These belongings would follow the ancestor’s soul to the afterlife. In the case of a pharaoh, large monumental tombs were built to harbor the body. Soldiers would guard the tomb. The Egyptians had a festival called the wag-festival, which celebrated life after death, and gave the Egyptians hope for a good afterlife. The Egyptians believed that lack of ancestor veneration was one of the worst things a soul could have. This would cause the soul of the ancestors to die a second death. 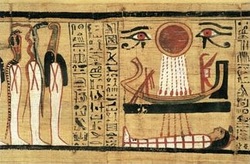 http://www.67notout.com/2011/07/how-ancient-egyptians-sent-letters-to.html
In other parts of Africa, almost every tribe practiced ancestor veneration. Ancestors were seen as keepers and guiders of life. They consider the deceased ancestors as a part of the family along with the living members.  They believed that the ancestors kept a spiritual connection with them. The Africans made their ancestors part of every event such as a funeral or wedding. In these events, offerings were made to honor the ancestors. These offerings were things life chickens or cows. The Africans would also build shrines and altars to honor their ancestors. People also honored the ancestors through dance. The African people also believed that you could only become an ancestor if you lived a good life because ancestors were to give spiritual guidance. Dying was not a good enough way to become a spirit guide. If an ancestor was unhappy with the path one had taken, an offering was usually given to the spirit of that ancestor. 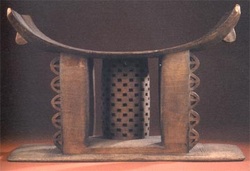 Wooden alter to represent an ancestor

In the Andean Region, ancestor veneration was practiced by all social classes. They worshipped ancestors on a higher level than they worshipped royalty. These people believed that if one did good deeds while mortal, they would join the sun after death. If one did not respect or show reverence to their ancestors, it was believed that an illness or other bad things would happen to the person. When a relative would die, the family would take the body and worship and care for it. The relatives of the deceased would keep the body and preserve it in houses or shrines. The remains of the body were called the ‘ylla’ which meant ‘The body of one who was good in life,’ and the ‘yllapa’ which meant ‘thunder.’ The bodies would be mummified and dressed in nice clothes. The Andean people even brought the mummified body out in festivals to be honored. These festivals, mostly in the summer solstice, would specifically be devoted to the ancestors and the reverence of family origins.  The winter solstice festivals were dedicated to the appearance of a family’s ancestors. They would also include the ancestors in family meetings.

The Andean people also would worship something called huacas, which is a sacred object or place. It was said that the souls of a family’s ancestors would reveal themselves through the worship of the huacas.

Statue made to represent the presence of an ancestor

600 BCE - 600 CE Ancestor Veneration in East Asia, Africa, the Mediterranean, and the Andean