Trouble Along the Frontiers
by Julianna Smith

Han China and the Xiongnu

The Xiongnu was a group of pastoral nomads. These people ruled what is now known as northwest China. The conflict between the Xiongnu and the Chinese began in the Qin Dynasty, when the Great Wall of China was ordered to be built. The Xiongnu were a continuous threat to China’s northern borders.

When the Xiongnu formed a confederation under a ruler called the chanyu in the third century BC. This Confederation was a threat to the Chinese because they would attack the northern Chinese frontier with 300,000 archers on horseback. Although the Great Wall did force the Xiongnu to slow down their raids, it did not fully stop them. The raids continued to occur until Emperor Wudi of the Han Dynasty ordered several military attacks on the Xiongnu.

At first, China tried to offer silk, gold, or even their princesses for marriage as a peace treaty. However, the Xiongnu did not accept their gifts.  In 129 BC, Han dynasty China declared war on the Xiongnu. The Han dynasty wanted to facilitate trade to the west, and the Xiongnu made this a difficult task. The Han dynasty under Emperor Wudi was able to defeat the Xiongnu Empire.
http://prezi.com/naxny8aii_47/external-problems-among-frontiers-han-china-and-the-xiongu/
http://www.chinaknowledge.de/History/Altera/xiongnu.html
http://www.princeton.edu/~achaney/tmve/wiki100k/docs/Xiongnu.html
http://asianhistory.about.com/od/glossarytz/g/xiongnuglos.htm
http://www.britannica.com/EBchecked/topic/273960/Xiongnu 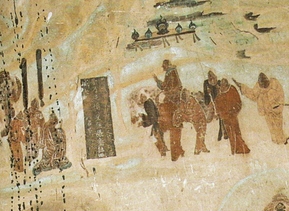 Gupta and the White Huns

The White Huns, also called the Hephthalites, were a nomadic confederation in Central Asia. Their empire was located in modern day Afghanistan, Uzbekistan, and Pakistan. Not much is known of the origin of these people, although there is no evidence that the White Huns are at all related to the Huns. 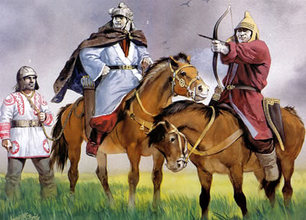 
Romans and their Northern and  Eastern Neighbors

In the Classical Roman Empire, soldiers that guarded the frontiers were responsible for defending against raids and invaders. Borders and boundaries gave way for cultural differences to occur between  the “civilized” Romans and the “barbarians.” These people affected the Roman Empire.

The Germanic people along the Rhine River and the Danube River gave the Roman Empire the most trouble even though the Roman Empire set up navy standings in these areas. Rome’s navy was not strong, and the threats from Germanic “barbarian” tribes used up most of Rome’s military resources. Because of this, Rome often recruited Germanic peoples to serve in the military.

An empire that gave Rome the most trouble was the Parthian Empire. Although Rome conquered most of the Mediterranean, it could never conquer Parthia. Parthia was an empire that already had a sophisticated culture and economy. The Parthian Empire grew wealthy because of their trade routes. When Roman expansion met the borders of Parthia, war was declared. This war dated approximately from 53 BC to 217 AD. 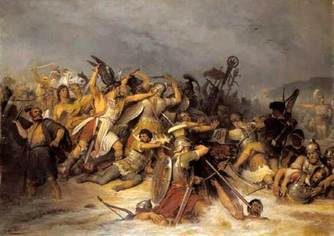 Trouble Along the Frontiers - by Julianna Smith
Powered by