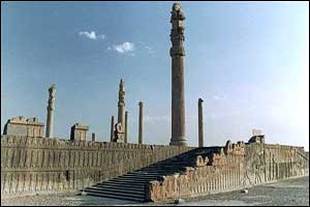 Cyrus and Darius were who made the greatness of the Achaemenid empire, by their brilliant planning and military adjustments, making the tribe have world power. Darius improved the economy by basing on a silver and gold coinage system. He made the codification of data part of the empire's legal system, a system which later became part of every Iranian laws.
The Achaemenids followed a system where they would only allow a certain number or regional autonomy in the form of "satrapy system".  The system was usually organized geographically. It consisted of a governor who was the "satrap", he had all the power and control over all the region. Then the general had control over the military groups, administrating and ensuring orders. And finally a state secretary, he kept all the official records. The general and secretary reported and were under the rule of the governor. All twenty satrapies were connected by the 2,500 miles long high way, (ordered to be built by Darius) the royal road from Susa and Sardis. Above all of them was the king, who had a body guard of 10,000 men known as the "immortals". The King had inspectors, "the eye and ears of the empire", they reported during local situations, made sure everything was always under control and informed the king about everything and anything.
Thee officical language of the empire was Old Persian, used for royal orders and inscriptions. But Aramaic was the greatest language used by the people.
Trade, agriculture, and tribute were the main and most important sources of the empire. Trade was crutial, it had an efficient infrastructure that made it easy to transport goods across long distances of the empire. This was such a successful commercial activity that the Persian words and names for certain items being traded were influenced and passed on to the Middle East, and eventually reached the English language. Words such as, bazaar, shawl, sash, turquoise, tiara, orange, lemon, melon, peach, spinach, and asparagus, were introduced by the Persians.
Darius also had a new capital be built at the Persepolis, where the states would offer their territory to allow the people to practice a festival type of celebration for the spring equinox. The capital's arts and architecture reflected Darius' perception of how he gave a new identity and life to the people of the empire. The culture, religion and architectural arts of the Achaemenid empire was a combination of ancietn Middle East regions, brought to one. http://www.iranchamber.com/history/achaemenids/achaemenids.php

The founder of the Parthian empire was Arsaces I of Parthia, during the mid-3rd century.
The empire was extended from the northern part of Euphrates to the eastern part of Iran. The empire was located on the Silk Roads between the Roman Empire in the Mediterranean and the Han Dynasty in China, which meant it was a huge port of trade. The Parthian empire quickly adopted manyparts of culture, religious beliefs, architecture, and customs of their neighboring empires.
The frist enemies of the Parthians were the Seleucids in the west and the Scythians on the east. Then became in conflict with the Roman empire. The Romans and Parthians were always competing to have the kings of Armenia as their secondary client. At the battle of Carhae in 53 BC, the Parthains captured the whole of the Levant form the Romans. Later some Roman emperors invaded Mesopotamia during the Parthian-Roman wars.
Parthia at one time occupied areas now in Iran, Iraq, Turkey, Armenia, Georgia, Azerbaidzhan, Turkmenistan, Afghanistan, Tajikistan, Pakistan, Syria, Lebanon, Jordan, Palestine and Israel. Because there are limited resources and historical pieces describing much of the Parthain empire's ruling period and content, the information is limited to Greek and Roman stories. 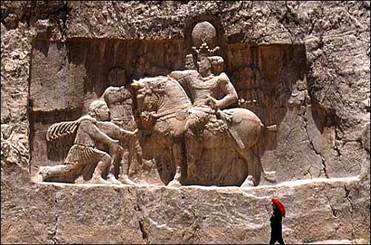 The Sassanid empire consisted of technological improvements, great ambition for urban planning, developments in agriculture and some centralization. The empire's rulers adopted the name "shahanshah" (king of kings). It is known to believe that the people were divided into four classes: the priests, warriors, secretaries and commoners. The social classification was known to not be very persist and not flexible. The royal princes, appealing rulers, major landlords, and priests formed a privileged stratum. This was all part of the Sassanid rule, one which was reinforced and created by  Zoroastrianism, and became the state religion. This ministry ended up having lots of the power; the head of the priestly class, military commander, the mobadan mobad, eran spahbod, and of bureaucracy.  Khosro I, another important ruler of the Sassanid empire, created the tax system used during this time, and rearranged the army to make it closer to the central government instead of to the local lords. He recreated important sources that were destroyed during war, such as farms and canals. Along with that he built new towns, cities, and great buildings. He also built great defensive walls in certain cities and towns to be used as reinforcement and protection against attack during war. He was bribed with 440,000 pieces of gold, by Justinian to keep piece and not cause wars, but he never seemed to have a problem with that, as he enjoyed the piece and didn't see any reason to disturb that. And even though he believed the Zoroastrinaian rule was the way to go and the more effieient religion of the empire, he was very tolerant with any other outside religions.
Years after warfare affected the Byzantines and Iranians, and the Sassanids were weakened by financial problems. Economic decline, increasing taxation, religious disturbance, inflexible social satisfaction, and the quick turnover by rulers were all contributes of the fall of this empire, and made things easier for the Arab invasion. This was known as "the beginning of an end".
http://www.ancient.eu.com/Parthian_Empire/
http://www.princeton.edu/~achaney/tmve/wiki100k/docs/Persian_Empire.html
http://www.iranchamber.com/history/achaemenids/achaemenids.php
America Guerrero
Powered by