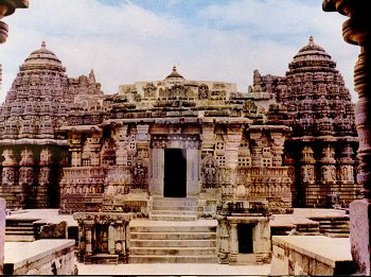 India: Architecture in India is one of it's most precious characteristics. It has evolved from time-to-time creating an impact to it's socio-economy and its geography. Its great diversity has created a great range if architectural specimens evolving. Almost all of its artwork is religious and very conservative.
The Hoysala temple is known for its various shrines and remarkable amount of carved patterns.  The raw materials that were available to each region impacted how the temples would turn out to be in its all overall. The Hoysala temple was built with soft soap-stone, and was created during the 12th and 13th century. Its material allowed the architectures working on this temple to work on the tradition of ivory and sandalwood carvings to create the most complicated and detailed pattern cravings of all Indian styles.
Originally this temple received a lot of sunlight. But the screens added to the roof later in time gives it a more mysterious and dark space. The top of the thick parapet wall is a seat, people would sit there and watch dances and performances on the hall. The hall consists of great pillars, which just emphasizes how the King wanted to make this temple the greatest. The four central pillars are what supports the ceiling (one if the most elaborated ceilings decorated in India) and its creating is also one of the greatest architectural achievements of India. 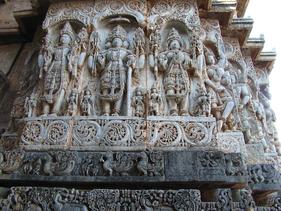 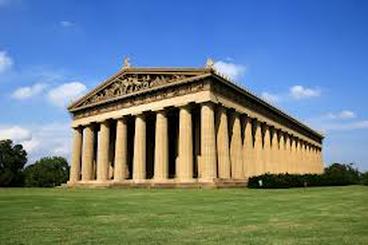 Greece: The techniques used in ancient Greek architecture are techniques used for the past two millennia. The three principal orders used in ancient Greek architecture are the Ionic,the Corinthian and the Doric. In the principle of Doric the columns are ridged and with no base. In the Ionic principle there are bases supporting the columns and the flutes are more vertical than those in the Doric style. And the Corinthian principle the columns are more elaborated, its capital is decorated with carved leaves.
The classical Parthenon was built after the destruction, of the other building originally constructed there, destroyed by the Persians. This temple was made in honor of Athena.  Its main material is limestone and its columns are made of Pentelic marble (used for the first time).  The temple's main cause was to keep protected Athena's monument made out of gold and ivory. This temple built in the Doric style, has 8 columns on its front and back and 17 columns on its sides. This order created a ratio of 9:4, which was also the ratio that governed everything inside the temple. And other things, such as the space and height between the columns made ratios to base the ruling of the temple.
Temples in Greece were not made for people to enter. They were made for the viewers to see and admire the temple from the outside, and observe the inside through the open doors. They were able to look inside enough to go through what they called "the transition", where they would relate to the monument in some personal matter and have an experience of being between earth and the divine and have a "smooth" transition. The view of Athena's monument from the outside of the temple made it look larger than the temple itself. 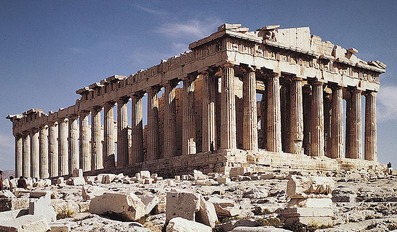 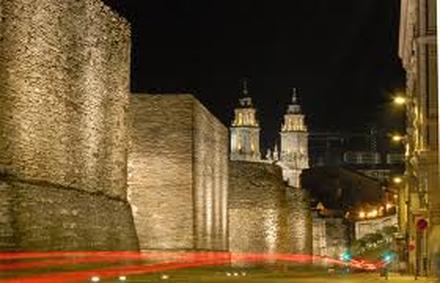 Rome: Rome's architecture was influenced by the ancient Greeks and the Etruscans. The romans wanted their architecture to be useful; they built bridges, apartment homes, public bathrooms, roads and much more. The Romans were the most successful in their architecture because they used the technique of the arch stone, which the Etruscans introduced to them. Their baths and arenas reflect their great skills. Roman architecture was more successful than the Greeks because they used arches that could support much more weight than those in the greek architecture.
The Lugo Roman Walls are known as "the finest surviving example of late Roman military fortifications". They were built in the third and fourth centuries to protect the city of Rome Lucus Augusti. People thought the walls were built for the protection of invasions, they were more intended to protect the city from the inside chaos and threats, such as uprises. It is known to be in the best shape because its five  ancient gates and forty of its ancient towers have no damage, for a monument built that long ago, although a lot has been added to the walls throughout time. 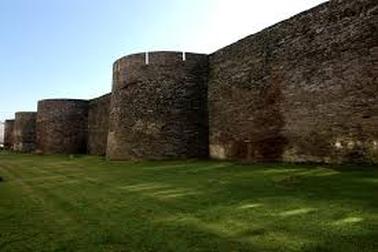