Weaving is the interlacing of long, thin materials such as thread, to make cloth or baskets. The earliest findings of weaving were in the Czech Republic, where textiles and basketry molds on burnt clay. These impressions date back to 23,000 BCE. The earliest woven cloth, made from flax, was found in Turkey. It dates back to 7000 BCE. In Ancient Mesopotamia, although it is hard to find actual weaving, many drawings were found of women using spindles to weave. In the East, people began weaving as early as 25,000 BCE. When sheep and goats were domesticated, ancient people began to use their wool to make textiles. Women would weave materials to make clothing. In Mesopotamia, weaving became a major industry.

Weaving was a “labor-intensive” process. After obtaining the hair or wool from animals, it had to be cleaned and untangled. Then, the fiber was thread onto spindles, wooden pegs used to twist the fibers. After spinning, the cloth was sometimes dyed. Archaeologists have found that the dyeing of fabrics dates back to 3000 BCE.

http://deyoung.famsf.org/blog/tags/tags/weaving
Carpet weaving is said to have dated back to 7000 BCE in central Asia. Carpet weaving was used by nomads to create soft, portable floors for their tents. Carpet weaving spread through Anatolia (Turkey), and Persia (Iran). Anatolians were some of the first people to weave carpets. They created a double-knotted method of carpet weaving between the fourth and first centuries BCE Village women dyed their wool and created patterns that told stories. These carpets were decorative and elaborate.

Methods of weaving and spinning have not changed that much over centuries, so archaeologists can gain insight into ancient textile manufacturer by studying the weaving techniques of less developed modern societies. 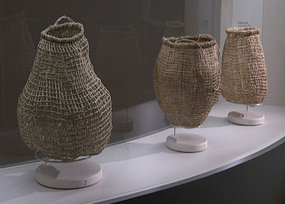 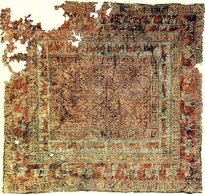